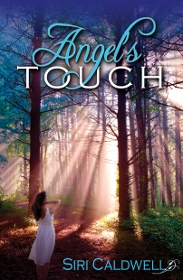 Kira has one goal: to make money by opening an exclusive spa in scenic Piper Beach. Megan agrees to help, but money is the last thing on her mind!

Kira Wagner needs a local expert to get her new hotel and spa up and running. Megan McLaren’s name is at the top of her list. Megan isn’t aware that the woman on her massage table is planning to offer her a job. She gives her healing touch as she would to anyone and turns down the invitation to dinner. But the persistent Kira awakens something else in Megan: memories of pasts they may have shared, none of which ended happily. When Megan realizes exactly where Kira plans to build her hotel, she agrees to consult, but her only goal is to make sure the new hotel doesn’t ruin the sacred space nearby. She wishes she could tell Kira the truth, but she’s deeply afraid that Kira will look at her like every other woman in her life when she explains about the powerful ley lines…and the angels…

Megan McLaren didn’t know how long she had been sitting at the bar alone chugging cranberry juice, watching the door, waiting for Amelia to show up, but she had just about had enough. One more song and she was going home.

Stellar. She was such a loser that her friend Gwynne was taking pity on her.

Gwynne thrashed her hips in that charmingly goofy way of hers she called dancing. “What are you doing here, anyway?”

“I ask myself the same question.” Amelia knew she wasn’t a fan of the Sand Bar. And yet, she had insisted on meeting her here instead of at Megan’s house.

Neutral ground—that’s what it was. Never a good sign.

She should never have said yes.

Megan jumped off her barstool and followed Gwynne to the two-person dance floor, which was as claustrophobic as the rest of the bar. Anything was better than hooking her flip-flops around that barstool and giving herself a cramp in the shins while she tried not to check her watch.

“Amelia stand you up?”

What do you know, she did have a cramp. “I thought dancing with you was going to distract me from that.”

Gwynne attempted an airborne spin and stumbled the landing. Laughing, she recovered by throwing her arms overhead in what might be considered a dance pose. “I could teach you this new move I just invented,” she wheedled, as if her jump/spin/flail combo were a bribe no sane woman could resist.

“You don’t know where she is,” Gwynne observed. “Do you?”

“I’m guessing she’s stuck in traffic.” Where else could she be? Piper Beach was at least a three-hour drive from Washington, DC, and Friday-after-work beach traffic was never fun, especially on Memorial Day weekend.

Megan gritted her teeth. No, Amelia hadn’t called. And no, it wasn’t like her not to call. She wasn’t picking up her phone, either. But no, she didn’t think she’d been in an accident. She unclenched her jaw and bobbed her shoulders with an ease she didn’t feel. Gwynne didn’t need to hear about it.

Megan sighed. “I have a feeling she’s planning to dump me.”

“You need to dump her first, then.”

“I’m not sure I’ve reached that point yet.”

“Why not? You have the advantage here. You know what’s coming. Why not save yourself some grief?”

“I want to give this relationship a chance.”

“Oh, come on. She has the aura of a toad. I don’t know why you ever went out with her in the first place.”

“Excuse me, we haven’t broken up yet. You don’t get to trash my girlfriend until after we break up. And she does not have the aura of a toad.”

“My mistake.” Gwynne ruined her apology with a wink. “Toads have lovely auras. Very green and healthy.”

Gwynne managed to insert a spin into her flailing movements without losing the beat, and looked so pleased with herself that Megan had to laugh. Even if dancing with friends was not the plan. Not with friends who were also exes, and who, by the way, had also dumped her.

It had been easier to know what to do with Gwynne. And even then, when it was obvious to both of them that they’d be better off as friends, she hadn’t had the heart to break it off. Gwynne, of course, had read her mind and dumped her first.

“I’m trying to remember what it was you liked so much about Amelia.”

“We haven’t broken up yet, remember?”

“I was looking forward to it so much that I forgot that bizarre detail. She makes you miserable.”

“That’s not true.” Amelia wasn’t always the most considerate person in the world, but she meant well. And they had that connection—that zing in the aura when they got close. Not that she could tell Gwynne that. She and Gwynne had strict unspoken rules about what topics they would and would not discuss. Zinging auras did not get the ex-girlfriend seal of approval. “I’m sure there’s a cosmic reason why we met.”

“Speaking of malfunctions…” Gwynne nodded in the direction of the entrance.

Amelia Barnett stood just inside the doorway a few yards away, scanning the room. She must have driven straight from the office, because she was still in her work clothes. Her suit was rumpled and her lipstick was long gone, but her short blond hair was still perfectly in place, shellacked into submission.

And someone was with her.

Amelia leaned over to whisper in the other blonde’s ear. She didn’t touch her at all—not her shoulder, not her arm, not the back of her waist, and definitely not her ass—but the way they were drifting into each other’s personal space, she might as well have.

There was no way Amelia would cheat on her in front of her. Was there? She was imagining things. Maybe Amelia gave a friend a ride.

And maybe that friend had thanked her while they were stuck in traffic at the Chesapeake Bay Bridge toll plaza by chewing off her lipstick.

Whoever she was, she followed the direction of Amelia’s outstretched arm and headed for the restrooms. Amelia stalked to Megan’s side.

“Definitely not green and healthy,” Gwynne announced as she made her escape.

“What was that all about?” Amelia watched Gwynne’s retreat for a couple seconds before snapping her attention back to Megan. “I need to talk to you.”

Megan ignored her unease and reached for her. “Hug first.”

Amelia’s shoulders softened at her touch. Encouraged, Megan rubbed the muscles between her shoulder blades. Amelia let her head roll back and closed her eyes with a deep sigh of relief.

But when Amelia touched the small of Megan’s back, instead of pulling her closer, she straightened, dug her fingers a little too hard into her back, and braced herself.

Amelia was going to break up with her. Here, in public. She wasn’t even going to apologize for being late tonight and making her worry.

Megan’s arms dropped to her sides.

Amelia took her elbow and led her to the bar. She asked the bartender for two of whatever was on tap, skipping her usual rant about their lack of Belgian beer. At least Megan would never again have to remind her that she didn’t like beer—Amelia pretended to forget, as if that would magically change anything.

“I don’t want to hurt you,” her soon-to-be-ex-girlfriend said, more gently than she had expected. “I know you think we have a past life thing going on—”

Megan cut her off. “I know you don’t believe me.” Now that it was happening, she just wanted to get it over with.

“Nobody believes that stuff, baby.”

Amelia took a deep breath. “I can’t do this anymore. I need to move on.”

One good thing about Amelia, she did like to come straight to the point. When she stabbed you with a knife, it was quick. Very humane.

Amelia took the two beers and joined her new friend at an intimate table in the corner.

She wondered if the new girl liked beer.